Beauty and the Beast

The Red Cloud Opera House on February 4, 1888, was the scene of an amateur theatrical entitled Beauty and the Beast. Small-town opera houses hosted such entertainments frequently, but the unique feature of this particular play was the inclusion of the young Willa Cather among the cast. Donning suit, top hat, and wax mustache, Cather played Beauty’s merchant father to a large and appreciative crowd.

The Red Cloud Chief on February 10, 1888, described the play, given “for the benefit of the indigent poor of this city. . . . The young folks who took part in the comedy were in training for about two weeks, under the management of Mr. W. F. O’Brien and Mrs. Sill, and to say that they merit great praise in the matter would be putting it in a light form. Every thing seemed to be perfect, and the various parts taken by the young ladies were rendered with that ease and perfection that only characterizes the most perfect training at the hands of the instructors and the adaptation of each part best suited to the individual who would be most apt to go through with it without failure.

“For instance Willa Cather took the part of ‘The Merchant’ and carried it through with such grace and ease that she called forth the admiration of the entire audience. It was a difficult part and well rendered.

“Mary Miner as ‘Chimpanze’ a prince transformed into a beast, was an excellent character, and as she appeared upon the stage representing a bear, it was the signal for a general uproar of applause. If she had been ‘old bruin’ himself she could not have acted her part better. Nellie West as ‘Goblin Page’ performed her part of ‘Attendant on Beast’ with perfect composure and good judgment.

“Minnie McAvoy and Trix Mizer as first and second daughters of Merchant, rendered their several parts to the utter satisfaction of the audience, who applauded them frequently. Margaret Miner as third and favorite daughter of Merchant, played her part splendidly and without fault and came in for her share of applause.

“Pearl Skeen as ‘Little Fairy’ acted her part charmingly, and looked a veritable fairy from fairy land as she tripped lightly to sweet strains of the piano in the mazy waltz. Nellie McBride as ‘The Fairy Aunt of Chimpanze’ rendered her part without a fault.”

The Chief noted that In Want of a Servant was afterward presented.

Willa Cather in costume as Peter Paragon in 1892 for a Union Girls’ Dramatic Club production of The Fatal Pin. NSHS RG2639-1-83 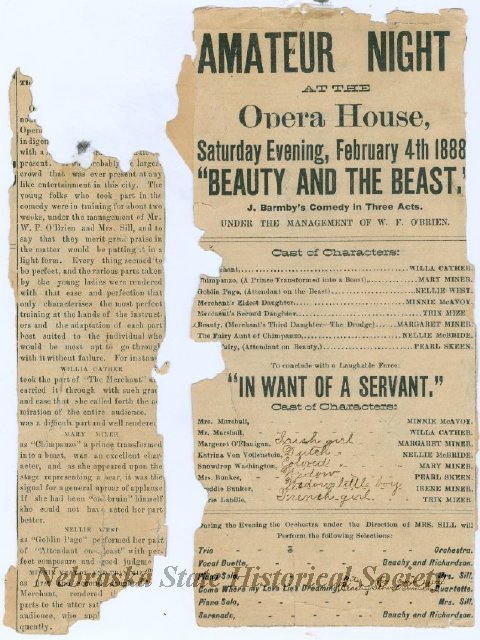 This newspaper clipping from the Red Cloud Daily Evening Chief, February 3, 1888, announced the production of Amateur Night at the Red Cloud Opera House, featuring Beauty and the Beast and In Want of a Servant. NSHS 3560-2884