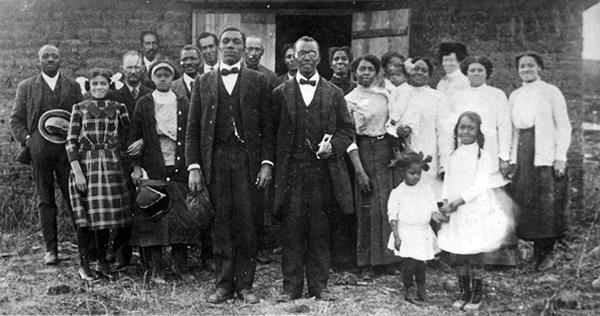 A dedication ceremony is scheduled for Monday, April 11, 2016, at 10 a.m. The marker is near the Brownlee turnoff road along U.S. Highway 83 in Cherry County. Descendants of the homesteaders from all over the country are expected to attend. Speakers at the ceremony will include a Cherry County Historical Society representative, Magnuson, Catherine Meehan Blount, a granddaughter of Charles and Hester Meehan — an interracial couple, who were among the early DeWitty settlers — and Joyceann Gray, a niece of Goldie Walker Hayes, a legendary teacher who remained in the county to work in one-room schoolhouses long after the settlement disappeared. The invocation will be conducted by the Reverend Khadijah Matin, also a niece of Walker Hayes. After the ceremony, Nebraska Humanities lecturer Vicki Harris will give a presentation about DeWitty at the Brownlee Community Hall, which will be followed by a potluck lunch.

“There are not many residents left in Brownlee and the surrounding ranches, but they are going all out to welcome the DeWitty descendants and the other celebrants,” said Magnuson. Magnuson said that Brownlee and DeWitty had a strong relationship. “I am glad that the marker mentions the close bond between the black settlers of DeWitty and the white residents of Brownlee,” Magnuson said. “The two communities were both really isolated and on their own in the depths of the Sandhills back then. Here we have the story of a mixed-race couple, integrated schools, neighbors helping each other when they needed it, and two communities coming together to celebrate the quintessential American holiday, Independence Day. This should be remembered.”

The NSHS approved a historical marker  for DeWitty, which  was established in 1907 along the North Loup River ten miles northwest of Brownlee. A group of homesteaders took advantage of the Kinkaid Act of 1904, which  allowed settlers to claim 640 acres each (one square mile) in the thirty-seven counties comprising the Sandhills. In 1916 the town changed its name to Audacious. It had amenities such as a post office, general store, church, barber, and baseball team, plus rural schools for local children.

Audacious and its vicinity grew to about a hundred families by 1917, but like most Kinkaider settlements, it eventually faded due to drought and crop failures. The Sandhills proved unsuitable for farming. The last of the settlers sold their land and moved away by 1936. Today there is no physical trace that the town ever existed. The marker will change that.

In thanking supporters, the Cherry County Historical Society posted that the “most satisfying part was the diverse communities who got involved, such as the descendants of DeWitty, residents of Cherry County and Valentine, fans a of U.S. Route 83 page on Facebook, and history buffs from near and far.” Gray, who is also a great-granddaughter of DeWitty homesteaders William Walker and Charlotte Hatter, summed up why this project matters: “When we can clearly mark where our ancestors have been—and by name—we can ensure the full story will be told and we can then better understand the purpose of our journey.”