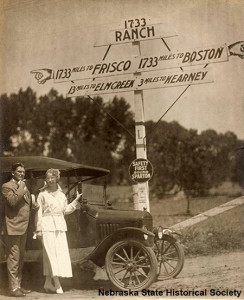 Photo from the early 1920s showing the Lincoln Highway directional sign near the 1733 Ranch.

Kearney has long promoted itself as the “Midway City” located halfway between the coasts, exactly 1,733 miles from both Boston and San Francisco. That mileage, however, long appeared to match no known historical route—until 2015. An article in the Summer 2015 issue of Nebraska History unravels the mystery, and shows how Kearney promoted itself starting the nineteenth century. The number 1733 has long been a big deal in Kearney. There was the 1733 Ranch with what was said to be the world’s largest barn, signs, maps, even a recent shoe store ad offering 17.33 percent off. Back in the days of the Lincoln Highway (present day U.S. 30), a road sign boasted that Kearney was “1733 miles to Frisco, 1733 miles to Boston.”

University of Nebraska-Kearney history professor John T. Bauer has long been fascinated by the number. It didn’t seem to add up. A quick look at any U.S. map shows that Kearney doesn’t look equidistant between San Francisco and Boston. The great circle distances are 1,263 miles between San Francisco and Kearney, and 1,486 between Kearney and Boston.

As for the Lincoln Highway, a 1915 guidebook measured 1,752 miles from San Francisco and 1,632 miles from New York City, where the highway ended. It didn’t even go to Boston.

Some of us at History Nebraska assumed that 1733 was probably just some made-up number or wild guess by Kearney boosters. This is the town, after all, that once campaigned to replace Washington, D.C. as the U.S. capital. What wouldn’t Kearney say to puff itself up?

Turns out they were telling the truth. Bauer was curious as to when this idea originated and how it fit with the city’s self-promotion as the “Midway City.” It turns out that the mileage is real, but is far older than the Lincoln Highway. It matches an old railroad route, and has been promoted by the city since at least 1890.

More details and illustrations appear in Bauer’s article, which provides a fascinating look at town boosterism in the latter nineteenth century and into the dawning automobile age of the twentieth.

Why Kearney will become a second Minneapolis (1889)